Example 1 : Politics is not a cup of tea.
Example 2 : My friends as well as my relatives are invited.subject verb agreement

In the above example, Politics is followed by the singular verb whereas friends and relatives are followed with the plural verb.The illustrated examples may have left you in a state of utmost confusion.Moreover, you must be wondering, why the verb is changing its number.It is because the verb always agrees with its subject in number and position. 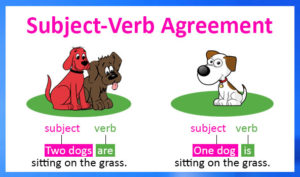 Importance of learning Agreement of Verb with Subject:
Writing e-mails, articles, business letters etc. have become common in every sector.Hence it has become important to hone our writing skills so that our silly mistakes may not land us in an embarrassing situation.

1.When the subject is the formal introductory there, the verb agrees with real subject that comes after the verb.
Example: There were few students present in the class yesterday.
Example: There are beautiful flowers in garden.

2. Subjects don’t always come before verbs in questions. Make sure you accurately identify the subject before deciding on the proper verb form to use.

Example: Where are the keys of car?
Example: What is the surprise for her?

3. If two subjects are joined by “and,” they typically require a plural verb form.

Example: The principal and the teachers are working diligently for the progress of the school.
Example: Food and clothes were distributed among the poor.

4. When the plural subject denotes a definite amount or quantity taken as a whole, the verb would be in singular form.

Example: Rice and Curry is my favourite food.
Example: Ten rupees was given to the beggar.

Example: No one is allowed to carry the phones in the examination hall.
Example: Every boy and girl was supposed to submit submit the assignments.

6. When two or more singular nouns are joined by or -nor, Either-or, neither-nor, the verb will be in the singular.

Example: Neither mom nor dad has arrived yet.
Example Either John or Jack has broken the vase.

Remember:
[ ]If one of the noun is singular and the other is plural, the verb must be plural and the plural subject must be placed near the verb.
[ ]Example: Either Tanvi or her friends have done this mischief.

[ ]If the subjects are joined by ‘or’ or ‘nor’ are of different persons, the verb agrees in person with the nearer one.
[ ]Example: Either she or I am mistaken.

7. A collective noun may take a singular or a plural verb.It takes a singular verb if the group is thought of as a whole.

Example: The class was punished.

Remember
[ ]It takes a plural verb if the individuals of the group are thought of.
[ ]Example: The crew were awarded.

8. Some nouns that are plural in form but singular in meaning take singular verb.

Example: Politics is not his cup of tea.
Example: Mathematics is her favourite subject.

Example: A lot of people visit Dubai.
Example: There is plenty of time left for the movie to start.

10. Nouns which have two parts such as spectacles, scissors or pants require plural verbs. However, when regarded as a pair, a singular verb is used.

Example: My mom’s spectacles are broken.
Example: The pair of scissor is lying on the table.