Call off vs call

Example: The meeting was called off.
Example: I need to call my mommy.

Take off vs take

Example: The plane is about to take off.
Example: The students take Public Speaking sessions here at Wabs Talk.

Blow out vs blow

Example: She blew out at me for no reason.
Example: The wind was blowing.

In the above examples, you can see, the verb has changed it’s meaning when combined with a preposition or an adverb.This is how a phrasal verb can be differentiated from a verb. 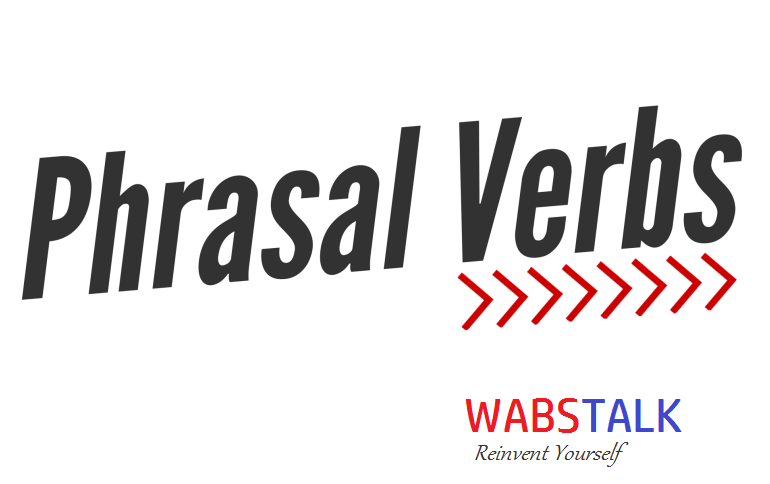 What are phrasal verbs?

Why phrasal verbs are important?

Phrasal verbs are important because they are extremely common in informal English. In addition, learning to use phrasal verbs correctly will help you sound natural in casual conversation.
Phrasal verbs open up a whole new world of possibilities for speaking English. They are phrases that give verbs completely different meanings. They are also used incredibly often in everyday conversation.

break into: to enter by force
Example: Burglars broke into my car last night.

break out: to start suddenly.
Example: Rioting broke out after the government raised the fuel prices again.

break out of: to escape from a place by force
Example: Several prisoners broke out of jail.

break up to: come to an end (marriage, relationship)
Example: She broke up with Daniel after dating him for five years.

bring up: to raise (a child)
Example: Sara is bringing up her children by herself.

Brush up on: to improve, refresh one’s knowledge of something
Example : I must brush up on my French before going to Paris next month.

bump into: to meet by chance or unexpectedly.
Example: I bumped into m at the bank. He says “hello”.

burn out: stop (something) working
become exhausted from over-working
Example: The light bulb burnt out.

call off: to cancel.
Example: the game was called off because of bad weather.

calm down: to become more relaxed, less angry or upset.
Example: It took Kylie several hours to calm down after she saw the accident.

carry on: to continue.
Example: The soldiers carried on walking in order to get to their post before dark.

clam up: to refuse to speak.
Example: When the police started asking questions, the suspect clammed up.

clamp down on: to act strictly to prevent something.
Example: The local authorities have decided to clamp down on illegal parking in handicapped parking places.

Come across: to find by chance.
Example: I came across some old photos of you while cleaning your closet.

Count on : to rely or depend on (for help)
Example: You can count on me to keep your secret.

cut down on: to reduce in number or size.
Example: I’ve decided to cut down the amount of sweets I eat.

cut out: to remove using scissors
Example: She cut out a coupon from the newspaper.

Work out: to do physical exercise.
to find a solution or calculate something
Example: You should work out twice a week at the gym.
Example: Can you work this out? I’m not good at maths.